How To Master The Mother Of All Hormones To Build Muscle And Burn Fat!

Guest Post By The Muscle Nerd, Jeff Anderson
In This Article:

•How you can tap into the ab-shredding workouts that will carve out your body like a "300" movie extra!

•How increasing your growth hormone will help you burn body fat at breakneck speed...for washboard abs that will turn heads at the beach (or at the coliseum)!

•What you can do AFTER your workout that will help you jack up your anabolic juices for a fat melting, muscle building conquest!


****
The epic war movie “300” jacked up the occupancy rates of every gym across the country as all of us guys dreamed of owning a set of washboard abs like the warriors from the film.

Hell, I practically have to snap my fingers in front of my wife’s face to break her out of her trance every time the movie trailer played on our TV! It's hard to compete with ripped and shredded ancient soldiers!

But there’s some sort of irony that this movie about a Spartan king who leads his army of 300 soldiers into battle against the invading Persian army, shows the defenders as being so big and buff.

You see, the Spartans were Greek and the Greeks are credited with the origin of the word “hormone” (from their word “horman”, meaning “to stir up or excite”), the very thing that they worked so hard to master to become such great athletes and warriors. 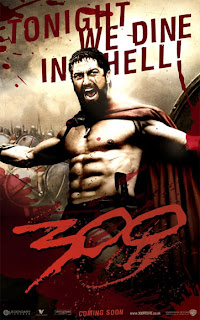 So as my own tribute to this killer movie, this article is dedicated to these formidable warriors who have inspired men everywhere to chisel out a “Spartan-like” physique able to fend off attackers anywhere. (Now leave our wives alone!)

In fact, if your goal is to lose fat and build muscle, it’s absolutely critical to pay close attention to your efforts to maximize your production of this powerful chemical in your body.

Released from your pituitary gland, growth hormone production peaks around puberty, and then slowly fades away as we age and plays a key role in the maintenance of muscle, bone mass and the balance of body fat.

This chemical is so powerful that even WITHOUT following an exercise program and healthy diet, it can build muscle and burn fat!

A study published in the New England Journal of Medicine showed that a small group of elderly men (aged between 61 and 81) who were given injected GH treatment showed an increase in both muscle and bone mass...AND reduced body fat at the same time.

Now, injected GH therapy does have its down sides so you can put down the phone...your doctor isn’t going to give you a prescription.

Joint and muscle pain can eventually occur from artificial stimulation and once you stop taking it, most of the benefits go bye-bye.  However, if done correctly, research has shown that naturally stimulating growth hormone can pay off with big dividends in a short period of time.

In fact, one university study from Denmark found that a 9-week program designed to naturally stimulate GH release resulted in strength gains 300% over normal increases!

Adding to that, men following the program increase arm strength by a whopping 37% compared with only 9% by the “control group” who only followed a “non-GH-stimulation” program.

And remember...these GH increases were activated not by injected hormone, but by completely natural means.

Now you can see why my program “Optimum Anabolics” has a primary focus of stimulating natural anabolic hormone output within the body...and why it has proven so effective at building muscle and burning off fat for thousands of men.

Hormone-focused training WORKS!
So to help you get started at mastering your own growth hormone factory, here are some of the key elements you need to apply to your workouts:

Exercise intensity is key when it comes to activating a GH response in your body. You want your workouts to be rather fast and furious, keeping total workout time no greater than 60 minutes. After that, you start to see a rapid decline in hormone response in the body.

You have a lot of work to do in just 60 minutes so in order to maximize your time in the gym, stick to “supersets” for your exercises and keep your rest periods to a minimum (about 60-90 seconds between sets).

A superset involves going straight from exercise 1 to exercise 2 without resting or with minimal rest in between. Once you’ve completed both exercises, you will take a short break (remember...”short” means just 60-90 seconds!) and go back to exercise 1 again to hit the next superset.

Keep your repetition count high (around 8-12 repetitions per set). This will help activate a lactic acid response in your muscles and lactic acid in turn activates the release of growth hormone. You’re going for the “burn” in this program!

Be sure to pause and squeeze your targeted muscle at the peak contraction point (for bicep curls as an example, this would be in the “up” position).

This will really activate the lactic acid response as well as make sure you’re hitting deep into your muscle fibers.

Once you’re done with your workout, save about 5 minutes at the end for “sprint training”...

Researchers from Loughborough University have shown that a group of athletes who conducted a short series of 30-second sprints reached growth hormone levels 25 TIMES their resting levels approximately 30 minutes after training.

You’re not going to want to miss out on THOSE kinds of results!

So at the end of your workout, do three to six 30-second sprints on your gym’s track or on the road to finish off the day and set yourself up for peak GH output.

Follow this program and YOU will soon be shopping shirtless for a shield and armor at the local blacksmith! (And stay away from my wife!)

Check Out Jeff's Optimum Anabolics program HERE!
Posted by Unknown at 12:02 AM

Well written. Great stuff. Thanks for the encouragement. I will pass this on! Thanks again.
Scott

Make Your Own Supplements