As you may already know, the world lost a fitness legend last month; Jack Lalanne passed away at the age of 96. Jack was an inspiration to millions, myself included, and his impact on the health and fitness industry was immeasurable. 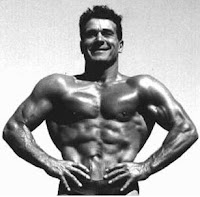 He was promoting the "fitness lifestyle" well before it became popular in the mainstream, and shared his message on the television show he hosted and through the numerous books he published and videos he produced. This man was way ahead of his time.

We can all learn alot from how Jack Lalanne lived his life and the lessons he shared. I've shared a few of his quotes that I particularly liked below.

LaLanne summed up his philosophy on nutrition and exercise as follows:

Jack had a strong opinion regarding the importance of training with intensity, as opposed to long, slow, easy workouts:

"I train like I'm training for the Olympics or for a Mr. America contest, the way I've always trained my whole life."

"Do [exercise] vigorously, like somebody is chasing you. You've got to do it hard. Otherwise, if you just take it easy and do it longer, you are spending all that time when you don't need it. Use that extra time with your weights instead."

When asked about his sex life, Jack LaLanne had a humorous response, saying that even as they become older, he and his wife still made love almost every night:
"Almost on Monday, almost on Tuesday, almost on Wednesday..."

-LOL! I'm going to have to steal that one for down the road!

He explained his reasons for exercising as follows:

You see, life is a battlefield. Life is survival of the fittest. How many healthy people do you know? How many happy people do you know? Think about it. People work at dying, they don't work at living. My workout is my obligation to life. It's my tranquilizer. It's part of the way I tell the truth — and telling the truth is what's kept me going all these years.”

Here is a short, inspirational excerpt from his television show, where Lalanne outlines a Ten Point Self-Improvement Plan:


He was also quoted as saying, "I can't die, it would ruin my image."

Don't worry Jack, your image remains untarnished. We will miss you.

Make Your Own Supplements